The problem of hair collecting in the shower drain is universal. No matter how hard you try to keep your drain clean and free of hair, eventually the water starts building up and you realize that your drain is likely clogged with remnants of hair. Imagine how life would be different if this weren’t a problem. The Drainwig claims to deal with this exact issue.

The Drainwig is a product that was first introduced as a pitch on the hit show, Shark Tank. the product was created by a family of 7, with 5 daughters with long locks! The family said that the Drainwig is a tool that is meant to be used in showers and bathtubs to collect hair and prevent clogging.

How does the Drainwig hair catcher work?

When you first see the Drainwig, you will notice how simple the design looks. The truth is that is a very simple and basic design and idea that serves a great purpose. It is very easy to use and will work for most shower drains.

The Drainwig is a metal chain, which is flanked with rubber ‘whiskers’ that catch the hair as it comes down the drain. Once you put the Drainwig in your shower drain, you will not need to take it out again for anywhere from 2 to 4 months, depending on the amount of hair that accumulates in your drain . When the time comes to replace your Drainwig, you will appreciate how quick and clean the process is! The whole process of setting up your Drainwig to start working is very fast and easy. Anyone will be able to do it on their own.

Here’s is what you need to do:

There’s no need to worry about operating the Drainwig, as it’s friendly for everyone, and does not need to replaced all that often, anyway. It’s important to know exactly what you’re getting when you choose to use a Drainwig, since it’s such a straightforward design. The features that set the Drainwig apart from other products are:

Who would have thought that something as simple as a chain with ‘whiskers’ could have such a big impact on quality of life?

Pros and Cons of the Drainwig

Before deciding to use a Drainwig in your home, you probably want to know exactly what to expect. It’s one thing to read and hear about what the Drainwig is supposed to do, but what about the actual experience of using a Drainwig? Weighing the pros and cons associated with the Drainwig will help make your decision easier.

Something that will be appreciated by anyone who lives a busy life, is the ease with which you will ‘install’ your Drainwig. There’s no real installation necessary, as all you do is slide it down the drain, and leave it to work its magic. You’ll be done setting up in seconds and ready for your next shower.

here are no surprises with the Drainwig. You get what you have seen advertised. It will collect hair in your shower drain and fight clogging.

While the flower design of the Drainwig top, which sits on the drain is nice looking, it presents functional issues, as it sometimes catches hair, which can block the top of the drain, if you don’t pull the hair off.

The Drainwig does its job so well that it even collects smaller pieces of hair that would probably pass through the drain, quietly, if left alone.

You may not realize until it’s too late, but the longer you leave the Drainwig in, the larger the clump gets. This may mean that you’ll need to take the drain cover off to remove your Drainwig, because the clump of hair may not fit through the small holes.

Thinking about the pros and cons of using the Drainwig can help you decide whether you feel that it’s worth the investment.

Drainwig Review: Does it work? 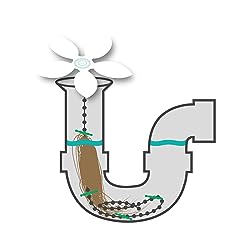 The overall consensus by customers about the Drainwig, is that it does perform the job it’s advertised to do, but won’t be a miracle fix, meaning that you will still need to do some maintenance.

It seems, from the reviews from customers, that the size and design of your drain will play an important role in how well the Drainwig will work for you. For example, some people found that the holes in their shower drain were so small that they were blocked by the flower on top of the Drainwig, which caused water accumulation. On the other hand, many customers said the Drainwig fit perfectly and easily into their drains.

It’s important to handle your Drainwig with care. Many customers have reported experiencing issues with the chain breaking as they were trying to pull it out of the shower drain. Just take your time, and make sure that you pull the chain gently.

The takeaway is that the Drainwig is likely to help you catch your hair and prevent clogging in your drains, with little maintenance effort or cleaning during replacement.

The affordable Drainwig gives you the opportunity to try living without the daily hassle of hair getting stuck in your shower drain. You just may find that once you start using the Drainwig, you’ll never want to stop.

Robert Adkins is an IT graduate student in his 30’s who lives in Lake Worth, FL. He loves working with digital technology. Here at Gadgets Living, Robert is a Technology writer who also works on developing and improving the website’s interface