Under-cabinet radios are slowly gaining popularity as a substitute for their bulkier, older cousin, the radio. Unlike the tradition radio option which takes up more space in the kitchen and in other parts of the house, under-cabinet radios offer a more compact solution. Older models used to have only the essential functions, like tuning to the AM/FM frequencies. Nowadays, under-cabinet radios have added functionality.

Advantages of Using an Under-cabinet Radio

Kitchen countertops are valuable space that is used for preparing food. Often times, the countertop is occupied by a myriad of kitchen appliances. Saving counter space is an important feature that the under-cabinet radio offers. The under-cabinet radio becomes a permanent fixture in the kitchen because it is mounted. It also allows one to continue doing a task in the kitchen while enjoying music.

Recent designs have also included additional features that assist in basic kitchen functions like being a kitchen timer for when baking or preparing dishes that need precise timing. Another bonus feature of an under-cabinet radio is being an overhead light fixture over dark counter space.

Because the market is filled with so many options, it can be overwhelming when choosing what to purchase. Here are some of the things to consider when purchasing an under-cabinet radio.

Modern devices have connectivity options that enable them to share information over one ecosystem. The common connectivity features that smartphones, tablets, desktop computers, and laptops have Bluetooth and USB. The under-cabinet radio should at least include a USB hub where you can connect your devices. Bluetooth connectivity is also a good feature to look for if you are going for the wireless option.

Though it may seem like under-cabinet radios are relatively older technology, it can still be very intimidating to use for many people. This is especially true for people who will be using this for the first time. Most people who buy this product can easily voice out the need for help but there are some who are not as vocal of their need for help. The user-manual should also be easy to understand.

An under-cabinet radio should still be able to function as it originally would- as a radio. The under-cabinet radio must be able to tune to both the AM and FM frequencies. This is important to keep the user informed and connected during circumstances when power outages occur like during storms and other natural calamities. It will also be nice if the radio can also function as a CD player.

One of the things to pay close attention to is the design of the radio. Check the size, the color, and the style of the radio. Examine the style and the color to see if it will go nicely along with the other appliances in the kitchen and with the cabinets. Will the under-cabinet radio fit the space you have allocated for it? Carefully consider if the aesthetics contribute to the functionality of the radio. It is also important to check if the radio is ergonomic.

Lastly, examine the different types of mounting options that are available for that model of under-cabinet radio. Since a major selling point of an under-cabinet radio is its ability to save counter space, it is important for the radio to be mountable on most, if not all, cabinets. A lot of manufacturers also provide the mounting hardware along with the radio. If you are having a hard time mounting the radio, here is a video showing how to mount under-cabinet radios.

There are high-end models of under-cabinet radios that have additional functional features like having LED lights to provide light over surfaces. There are also under-cabinet radios that have an alarm function that can even be snoozed. Some models even allow one to answer phone calls over Bluetooth connectivity and with the built-in microphone. Most recently released models also come with an LED display that also functions as a digital clock. A lot also comes with remote control for easier access to the radio even if you are at the other end of the room. 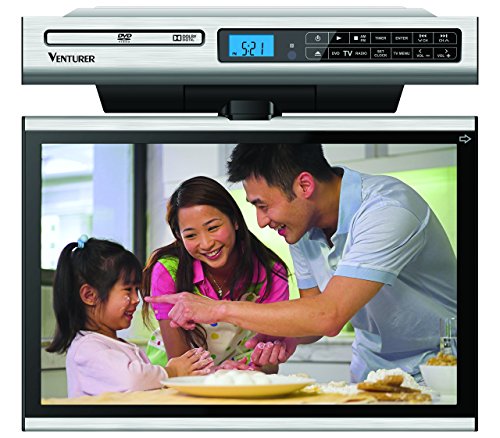 The Venturer KLV3915 15.4-Inch Undercabinet Kitchen LCD TV/DVD Combo comes with a 15.4-inch LCD screen that flips around to save space and protect the screen from damage. It also comes with a DVD player that can support audio and video DVDs and CDs. It also plays CDs that contain JPEG collections. The TV function comes with two different tuner options; ATSC or NTSC. The ATSC is for digital broadcasts. It receives the digital television signal broadcasts of TV Stations over the air. On the other hand, the NTSC is for analog broadcasts. NTSC tuners are commonly used over cable systems. 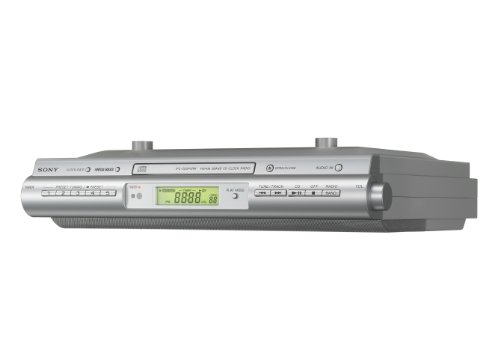 The Sony ICFCDK50 Under Cabinet Kitchen CD Clock Radio has a slim and neutral-colored design that allows this under-cabinet radio to blend in with most kitchen set-ups. It can pick-up both AM and FM frequencies. This radio comes with a digital tuner that promises smooth and accurate tuning between stations for both AM and FM radio stations. It also offers 15 preset stations; 10 stations from the FM frequency and 5 stations from the AM frequency. It is set-up with a built-in audio cable to expand the options when listening to music.

The CD player feature can play both factory-pressed CDs and CD-Rs or CD-RWs. Factory-pressed CDs are the original CD release of artists. CD-Rs or CD-RWs are consumer-produced collections of audio files. The package includes a remote control with a magnetic backing. The remote control includes Play, Pause, Stop, and Search commands when listening to a CD. 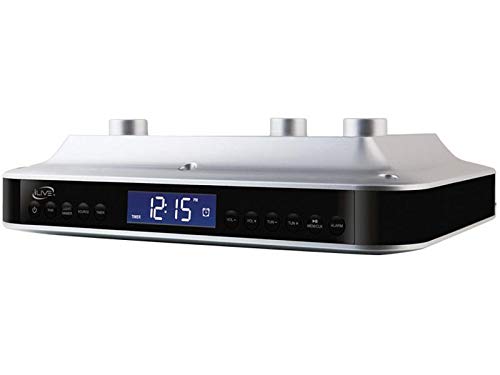 The iLive iKB333S Under Cabinet Radio with Bluetooth Speakers has a black-and-silver color palette with the rounded edges is a modern design that mimics most kitchen appliances that it fits in most kitchens. It supports the FM frequency and the radio can store up to 20 radio station presets in its memory. The back-lit, negative LCD display shows a digital clock that has a single alarm feature. The radio runs on two non-standard batteries but it comes with an AC/DC power adapter. The built-in stereo speakers mean the music can be heard from either end of the room. However, if you are looking for higher quality music output, the speakers might not be able to match high expectations. 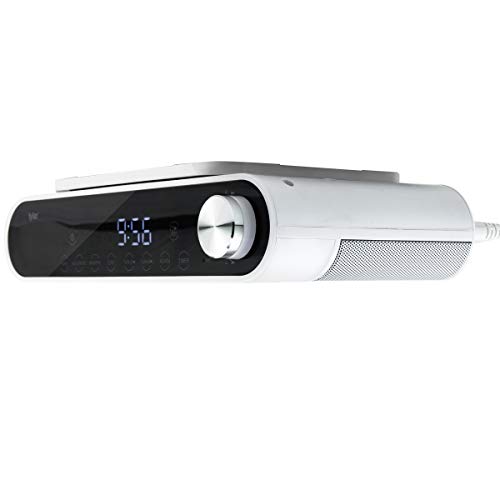 The sleek, minimalist design of the Tyler Bluetooth Under The Cabinet Universal Wireless Music System can be great for contemporary kitchens.It is compatible with FM frequencies and it can store up to 20 FM Stations in its memory. Bluetooth connectivity is available for those who prefer to listen to the playlist from their phones, tablets, and other Bluetooth-enabled devices. If you are looking for a kitchen radio that can play the music that can be heard over the noise, this might be the radio for you for it has two built-in speakers. 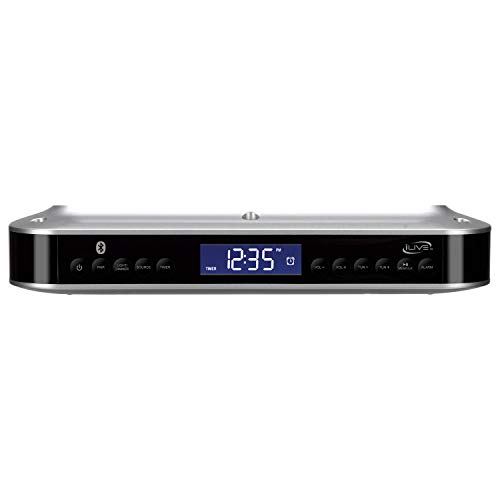 The iLive Wireless Under Cabinet Bluetooth FM Radio is designed to be sleek and simple. This makes it a seamless fit in any kitchen set-up. It can support the FM frequencies with 20 available stations presets in its internal memory. The negative LCD display shows a digital clock that also provides the timer action. Bonus functions include a timer option that can be used for cooking and a single alarm.If you are looking for an under-cabinet radio that you can connect to even from other rooms in the house, this radio’s Bluetooth connectivity has a wireless range of 60 feet. 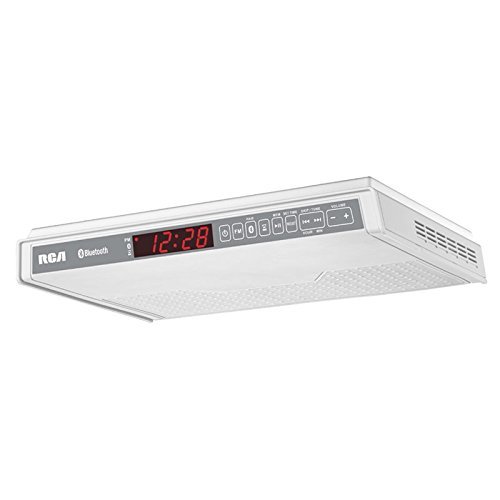 The RCA SPS3688B Under Cabinet Radio comes in the neutral color white to match the theme of any kitchen. Because it is slim and lightweight, weighing only a little over 2 pounds, it can be easily mounted under kitchen cabinets. Built-in stereo speakers enable listening enjoyment within the same room.It can pick up FM frequencies and can store up to 20 preset stations in memory.

The contemporary design of the Sylvania SKCR2810BT Under Cabinet Clock Radio makes it a cool addition to any room in the house. It can be easily mounted under kitchen cabinets. It is equipped with the Bluetooth version 3. This radio can be connected to smartphones and tablets to play music. It features an LED screen that shows the time through a digital display. The screen also shows the current radio station that is being streamed for easier streaming between radio stations. 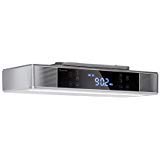 The Auna KR-140 has a tuner for FM frequencies. It can also store up to 40 stations in its internal memory as presets. Bluetooth connectivity allows the Auna KR-140 to be connected with other Bluetooth enabled devices like smartphones and tablets. Its silver and black design are streamlined and stylish enough to blend in different kitchen set-ups. The Auna KR-140 model comes with two built-in speakers. If you are looking for a radio that can play songs with your favorite bass lines, this also comes with two small woofers for a better bass experience.

9. Sylvania SKCR2713 Under Counter CD Player with Radio and Bluetooth

The Sylvania SKCR2713 has a modern design and comes in the neutral color black to fit in nicely with most kitchen set-ups. It has a tuner for FM frequencies. It can also play music from CDs. The radio has the latest Bluetooth version connectivity that allows it to connect with devices that are also Bluetooth enabled to play music with the one push of one button. 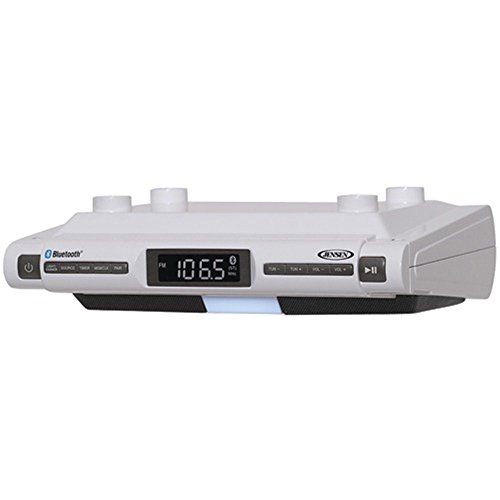 The slim design of this Jensen Under Cabinet Kitchen Radio model enables it to fit in most spaces under the cabinet radio to save up with counter space. If what you are looking for is a radio that is light enough to be supported by cabinets, this may be the radio for you. The digital FM tuner allows easier and smoother station surfing between channels. It comes with a Bluetooth function, so it can be connected with other devices to continue listening to music.

From all of the under cabinet radios in this list, the best so far is the RCA SPS3688B Under Cabinet Radio. It is fashionable yet stylish enough to fit a great number of themes. Since it is lightweight and compact, the radio can be mounted under most cabinets. Its features may be basic, like being able to support only FM frequencies, but the product boasts of a big following because of its quality when compared with the other models, especially the speakers.

The Bluetooth connectivity is more intuitive than most. Its bonus functions are also more practical compared to the other under cabinet radios since it sticks with the essentials while offering great value. If you are looking for an under cabinet radio that is worth the price with high-quality functions that go beyond the theatrics, this may be the radio for you.

Our mission is to provide honest reviews!